This weekend I’m at The Music Education Hack in New York City where educators and technologists are working together to transform music education in New York City.  My hack, Rock Steady,  is a drummer training app for the iPhone.  You use the app to measure how well you can keep a steady beat.  Here’s how it works: 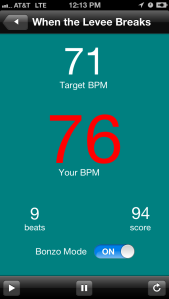 First you add songs from your iTunes collection. The app will then use The Echo Nest to analyze the song and map out all of the beats. Once the song is ready you enter Rock Steady training mode: The app will show you the current tempo of the song. Your goal then is to match the tempo by using your phone as a drumstick and tapping out the beat.  You are scored based upon how well you match the tempo.  There are three modes: matching mode  – in this easy-peesy mode you listen to the song and match the tempo.  A bit harder is silent mode –  you listen to the song for a few seconds and then try to maintain the tempo on your own. Finally there’s bonzo mode – here the music is playing, but instead of you matching the music, the music matches you. If you speed up, the music speeds up, if you slow down, the music slows down.  This is the trickiest mode – you have to keep a steady beat and not be fooled by the band that is following you.

This is my first iOS hack. I got to use lots of new stuff, such as Core Motion to detect the beats. I stole lots of code from the iOS version of the Infinite Jukebox (all the track upload  and analysis stuff).  It was a fun hack to build. If anyone thinks it is interesting I may try to finish it and put it in the app store.