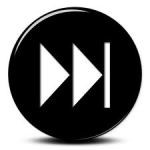 At the time when I was coming of age musically, when we listened to music on LPs, the listening experience was very different than it is today. For one, if you didn’t like the currently playing song you had to get out of your chair, walk over to the turntable, carefully pick up the tone arm and advance the needle to the next track.  That was a lot of work to avoid three minutes of bad music. You really had to really dislike a song to make skipping it worth the effort. Today, with our fancy iPhones and our digital streaming music subscription services, skipping a song couldn’t be easier. Just tap a button and you are on to the next song.  The skip button is now a big part of the overall listening experience. Don’t like a song? Skip it. Never heard a song? Skip it. Just heard a song? Skip it. The Skip even plays a role in how we we pay for music. For most music subscription services if you want the freedom to skip a song whenever you want, you’ll need to be a premium subscriber, otherwise you’ll be limited to a half-dozen or so skips per hour.

I am interested in how people are using the skip button when listening to music so I spent a bit of time taking a closer look at skip data. This and the next blog post or two will be all about the skipping behavior of music listeners. We’ll take a look at how often people skip, whether different listener demographics have different skipping behavior, what artists and genres are most and least likely to trigger skips and more!

The Data
This is my first deep dive into Spotify data. The Spotify team has built up a fantastic big data infrastructure making it easy to extract insights from the billions and billions of music plays. For this study I’ve processed several billions of plays from many million unique listeners from all around the world.

The following plot shows the average skipping behavior for millions of listeners and billions of plays. The plot shows the rather steep drop off in listeners in the early part of a song when most listeners are deciding whether or not to skip the song.  Then there’s a slow but steady decline in listeners until we reach the end of the song where only about 50% of the listeners remain.

The next plot shows the average skipping behavior within in the first 60 seconds of a song. It shows that most of the song skips happen within the first 20 seconds or so of the song, and after that there’s a relatively small but steady skipping rate.

We can also calculate an overall skip rate per listener – that is, the average number of times a listener skips a song per hour.

On average a listener is skipping a song once every four minutes. That’s a whole lot of skipping.

Who is doing all that skipping?

There seems to be little difference as to how often men and women skip.

When we are at our desktops, we tend to settle into longer listening sessions and skip less, while when we are mobile we spend much more time interacting with our music. 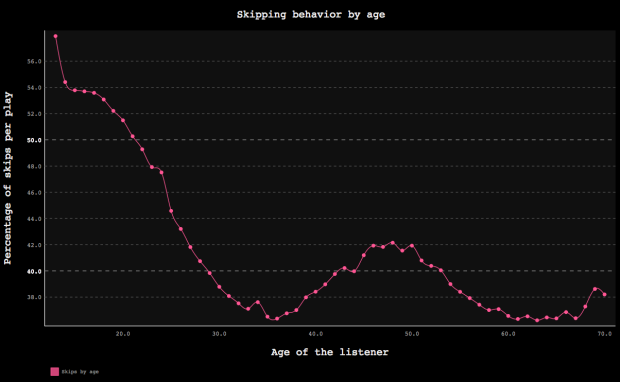 This plot shows the skipping rate as a function of the age of the listener.  It shows that young teenagers have the highest skipping rate – well above 50%, but as the listener gets older their skipping rate drops rather dramatically, to reach the skipping nadir of about 35%.  Interestingly, the skipping rate rises again for people in their late 40s and early 50s.  I have a couple of theories about why this might be.  The first theory is that the skipping rate is a indication of how much free time a person has time. Teenagers skip more because they have more time to devote to editing their music stream, whereas thirty-somethings, with their little kids and demanding jobs, have no time to pay attention to  their music players.  The second theory, suggested by Spotify über-analyst Chris Tynan, is that the late-forties skipping resurgence is caused by teenagers that use their parent’s account.

When do people skip the most?

The following plot shows the skipping behavior over a 24 hour period.  To create the plot, I analyzed the listening behavior for UK residents (which are conveniently confined to a single timezone) over several weeks.

The plot shows that the skipping rate is lowest when people are paying less attention to music – like when they are asleep, or at work. Skipping behavior peaks in the morning hour as people start they day and start to head into work and again at the end of the day when they are at home or out socializing with their friends.  The plot shows the time of day when people tend to have the most attention to devote to hand-curating their music stream. When people are sleeping or working, their skip rate goes down.

In the next plot, below, the skipping rate is overlaid with normalized song plays.  It is interesting to see that the highest skipping rates do not coincide with the peak music playing times of the day, but instead is aligned with the times of day when rate of change in plays is the most. 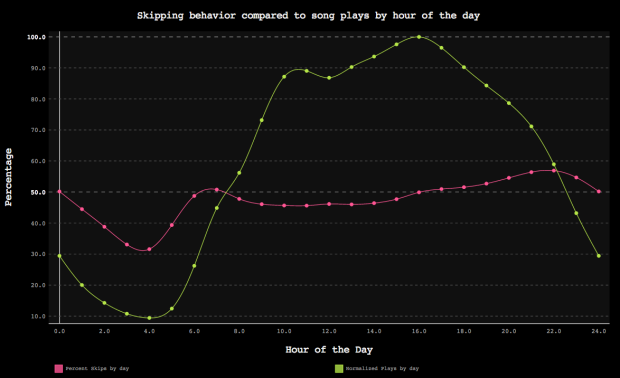 Skipping behavior by Day of the Week

The following plot shows the average skipping rate per day of the week.  The skipping rate is higher on weekends, showing, once again, that when people have more spare time, they are more apt to curate their listening sessions by skipping tracks. 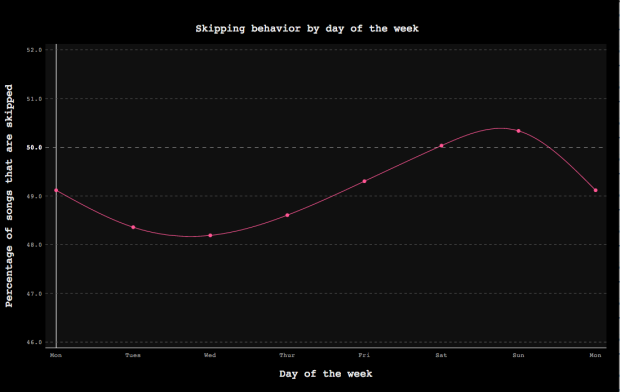 Take away
The Skip really has changed how we listened to music.  It plays a significant role in how we interacts with our music stream. When we are more engaged with our music – we skip more, and when music is in the background such as when we are working or relaxing, we skip less. When we have more free time, such as when we are young, or on the weekends, or home after a day of work, we skip more. That’s when we have more time to pay attention to our music. The big surprise for me is how often we skip.  On average, we skip nearly every other song that we play.

Skipping has become an important part of how we listen to music.  It is no surprise then, that ‘unlimited skipping’ is a feature used to entice people to upgrade to a premium paid account. And it may be one of the reasons why people would switch from a service that doesn’t offer unlimited skips even on their premium service to one that does.

Coming soon: Look for my next post that will look at which genres, songs and artists get skipped the most and the least.

This entry was posted on May 2, 2014, 8:52 am and is filed under analytics, Music, Spotify, The Echo Nest, zero ui. You can follow any responses to this entry through RSS 2.0. Both comments and pings are currently closed.