I spent this weekend at Rethink Music Hackers’ Weekend building a music hack called Map of Music Styles (aka MOMS).  This hack presents a visualization of over 1000 music styles. You can pan and zoom through the music space just like you can with Google maps.  When you see an interesting style of music you can click on it to hear some samples of music of that style. 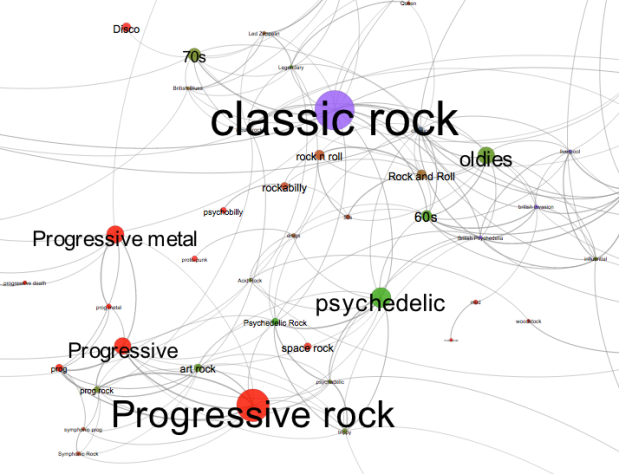 It is fun to explore all the different neighborhoods of music styles. Here’s the Asian corner: 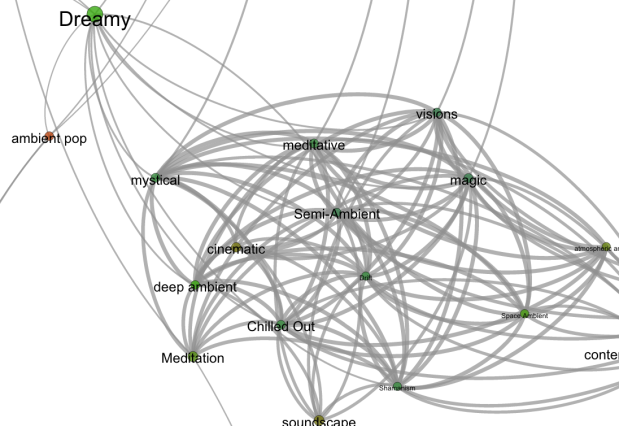 To build the app, I collected the top 2,000 or so terms via The Echo Nest API. For each term I calculated the most similar terms based upon artist overlap (for instance, the term ‘metal’ and ‘heavy metal’ are often applied to the same artists and so can be considered similar, where as ‘metal’ and ‘new age’ are rarely applied to the same artist and are, therefore, not similar).  To layout the graph I used  Gephi (Its like Photoshop for graphs)  and exported the graph to SVG.  After that it was just a bit of Javascript, HTML, and CSS to create the web page that will let you pan and zoom. When you click on a term, I fetch audio  that matches the style via the Echo Nest and 7Digital APIs.

There are a few non-styles that snuck through – the occasional band name, or mood, but they don’t hurt anything so I let them hang out with the real styles.   The app works best in Chrome. There’s a bug in the Firefox version that I need to work out.

Give it a try and let me know how you like it:    Map of Music Styles

This entry was posted on April 22, 2012, 11:53 am and is filed under code, data, events, fun, tags, The Echo Nest, visualization. You can follow any responses to this entry through RSS 2.0. Both comments and pings are currently closed.