What better way to spend a weekend on the French Riviera then in a conference room filled with food, soda, coffee and fellow coders and designers hacking on music!  That’s what I and 26 other hackers did at the MIDEM Music Hack Day. Hackers came from all over the world to attend and participate in this 3rd annual hacking event to show what kind of of creative output can flow from those that are passionate about music and technology.

Unlike a typical Music Hack Day, this hack day has very limited space so only those with hardcore hacking cred were invited to attend.  Hackers were from a wide range of companies and organizations including SoundCloud, Songkick, Gracenote, Musecore, We Make Awesome Sh.t, 7Digital, Reactify, Seevl, Webdoc, MuseCore, REEA, MTG-UPF, and Mint Digital and The Echo Nest.  Several of the hackers were independent.  The event was organized by Martyn Davies of  Hacks & Bants along with help from the MIDEM organizers.

The hacker space provided for us is at the top of the Palais – which is the heart of MIDEM and Cannes. The hacking space has a terrace that overlooks the city, giving an excellent place to unwind and meditate while trying to figure out how to make something work. 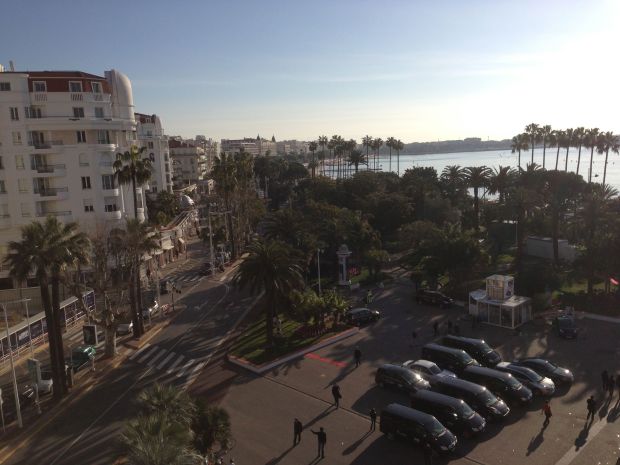 The hack day started off with a presentation by Martyn explaining what a Music Hack Day is for the general MIDEM crowd. After which,  members of the audience (the Emilys and Amelies) offered some hacking ideas in case any of the hyper-creative hackers attending the Hack Day were not able to come up with their own ideas.

After that, hacking started in force. Coders and designers paired up, hacking designs were sketched and github repositories were pulled and pushed.

The MIDEM Hack Day is longer than your usual Music Hack Day. Instead of the usual 24 hours, hackers have 45 hour to create their stuff.  The extra time really makes a difference (especially if you hack like you only have 24 hours).

We had a few visitors during the course of the weekend. Perhaps the most notable was Robert Scoble.  We gave him a few demos. My impression (based upon 3 minutes of interaction, so it is quite solid), is that Robert doesn’t care too much about music.  (While I was giving him a demo of a very early version of Girl Talk in a Box, Robert reached out and hit the volume down key a few times on my computer. The effrontery of it all!). A number of developers gave Robert demos of their in-progress hacks, including Ben Fields, who at the time, didn’t know he was talking to someone who was Internet-famous.

As day turned to evening, the view from our terrace got more exciting. The NRJ Awards show takes place in the Palais and we had an awesome view of the red carpet. For 5 hours, the sounds of screaming teenagers lining the red carpet added to our hacking soundtrack.  Carly Rae, Taylor Swift, One Direction and the great one (Psy) all came down the red carpet below us, adding excitement (and quite a bit of distraction) to the hack.

Yes, Psy did the horsey dance for us.  Life is complete.

Finally, after 45 hours of hacking, we were ready to give our demos to the MIDEM audience.

There were 18 hacks created during the weekend.  Check out the full list of hacks.  Some of my favorites were:

It was fun demoing my own hack: Girl Talk in a Box – it is not everyday that a 50 something guy gets to pretend he’s Skrillex in front of a room full of music industry insiders.

All in all, it was a great event. Thanks to Martyn and MIDEM for making us hackers feel welcome at this event.  MIDEM is an interesting place, where lots of music business happens. It is rather interesting for us hacker-types to see how this other world lives. No doubt, thanks to MIDEM Music Hack Day synergies were leveraged,  silos were toppled,  and ARPUs were maximized.  Looking forward to next year!

This entry was posted on January 29, 2013, 7:10 am and is filed under code, events. You can follow any responses to this entry through RSS 2.0. Both comments and pings are currently closed.