Jennie takes over the Internet

My daughter Jennie made a hack last week at Hill Holliday‘s TVnext Hack.  She won her category, and ultimately went on to win the grand prize. She got lots of prizes including multiple iPads, Rokus boxes, Apple TVs, lots of money and even Viggle Points.  Eliot wrote a really nice article about how Jennie found herself at the hackathon and how she managed to win it.  Since then it has been a rather crazy week for Jennie. She’s received multiple internship offers, a number of interview requests and an offer to help market her hack.  Today, her story got picked up by Mother Jones which has opened the mainstream media floodgates.   In the last 24 hours there have been stories in: US News and World Report,  The Los Angeles Times, Huffpo, CNET, Hollywood.com,  Dailydot, The AV Club, IMDB,  Turnstyle,  The Mary Sue (The Geek Guide to Girl Culture) and Wil Wheaton! More to come tomorrow. Yes, it is a big day for Jennie – she had her last AP Exam of high school (Calculus), she got her  birthday present (an iPhone), and she was interviewed for NPR Morning Edition (expect  to hear her tomorrow morning Update – it is here).  Her next life goal is to get more twitter followers than her friend Andrew (@ambushsabre).  It’s a lot for someone just two days shy of her 18th birthday. 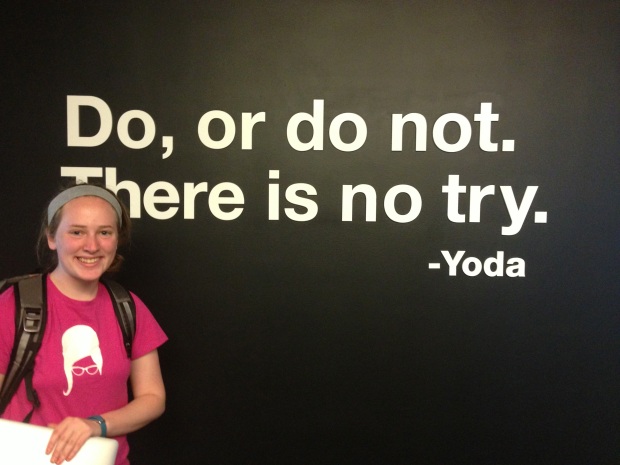 (Note, Jennie has never ever seen The Empire Strikes Back).

Update (May 11) – as I write this, a Good Morning America camera is filming Jennie typing on her computer.  She has had recent appearances in:  slashdot, Marketplace, Aljazeera, AP (Wire service),  lots of foreign news sites from Romania, Sweden and France.  Here’s a photo of the Good Morning America shoot:

This entry was posted on May 8, 2013, 8:09 pm and is filed under Music. You can follow any responses to this entry through RSS 2.0. Both comments and pings are currently closed.