I’m just back from a whirlwind trip to Cannes where I took part in the first ever MIDEM Hack Day where 20 hotshot music hackers gathered to build the future of music.  The hackers were from music tech companies like Last.fm, SoundCloud, Songkick, The Echo Nest, BMAT,  MusixMatch, from universities like Queen Mary and Goldsmiths,  one of the four major Labels, and a number of independent developers.    We all arrived to the exotic French Riviera, with its casinos, yachts and palm trees.  But instead of spending our time laying on the beach we all willingly spent our time in this wonderful room called Auditorium J: 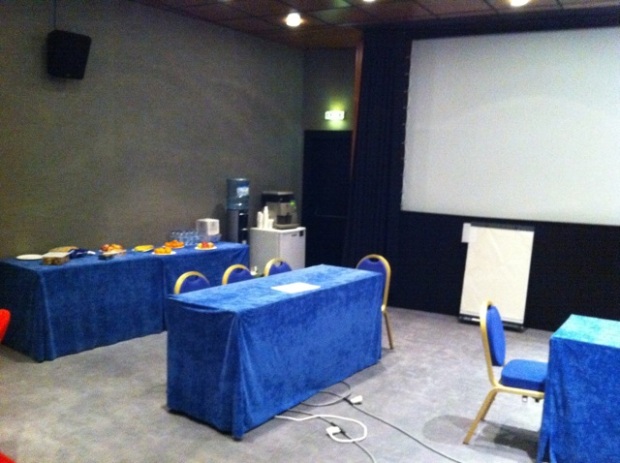 First thing was we did was rearrange the furniture so we could all see each other making interactions easier.  It wasn’t long before we had audio hooked up – with hackers taking turns at being the DJ for the room.

Dave and I took a break from the hacking to give a talk on the ‘New Developer Ecosystem’.  We talked about how developers were becoming the new gatekeepers in the world of music.  The talk was well attended with lots of good questions from the audience. (Yes, I was a bit surprised. I was half expecting that MIDEM would be filled with the old guard – reps from the traditional music industry that would be hostile toward self-proclaimed new gatekeepers.  There were indeed folks from the labels there and asking questions, but they seemed very eager to engage with us).

While Dave and I were talking, the rest of the gang had self-organized, giving project pitches, forming teams, making coding assignments and perhaps most importantly figuring out how to make the espresso machine work.

Here are some of the project pitches: 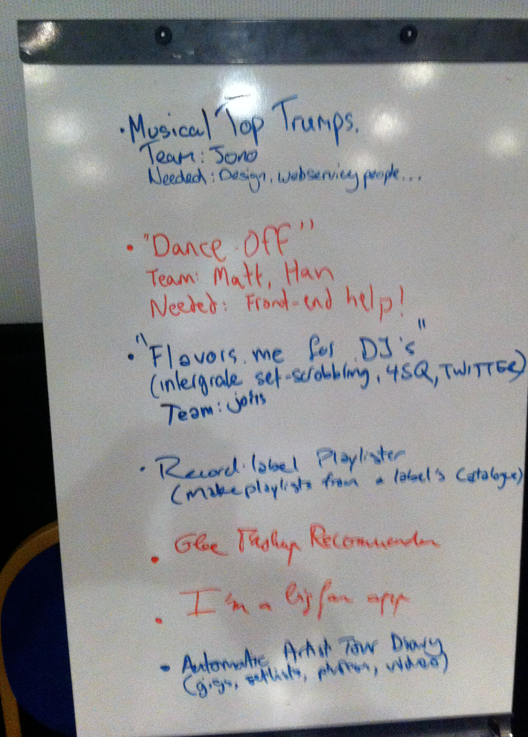 Some teams started with designs with dataflow diagrams, while others dived straight into coding (one team instead, starting composing the music for their app)

After the lightening design rounds, people settled into their hacking spots to start hacking:

By mid-afternoon on the first day of hacking, the teams were focused on building their hacks.

There were some interesting contrasts during the day.  While we were hacking away in Auditorium J, right next door was a seminar on HADOPI.   (the proposed French law where those accused of copyright violations could be banned from the Internet forever).

As we got further in to our hacks, we gave demos for each other

Over the course of the weekend, we had a few ‘walk-ins’ who were interested in understanding what was going on.  We did feel a little bit like zoo animals as we coded with an audience.

Taylor Hanson dropped by to see what was going on.  He was really interested in the idea of connecting artists with hackers/technologists.  After the visit we were MMMboppping the rest of the day.

Towards the end of the first day, the Palais cleared out, so we had the whole conference center to ourselves.  We made the beer run, had a couple and then went right back to hacking.

Finally, the demo time had arrived.  After more than 24 hours of hacking we were ready (or nearly ready).  Demos were created, rehearsed and recorded.

We presented our demos to an enthusiastic audience. We laughed, we cried …

Thanks much to the MIDEMNet organizers who took care of all of the details for the event – sandwiches, soda, coffee, flawless Internet.   They provided everything we needed to make this event possible.   Special thanks to Thomas Bonte (unofficial Music Hack Day photographer)  for taking so many awesome photos.

This entry was posted on January 27, 2011, 7:46 am and is filed under code, events, fun, Music. You can follow any responses to this entry through RSS 2.0. Both comments and pings are currently closed.