By Parag Chordia and Alex Rae – presented by George Tzanetakis

Well, this is unusual that George will be presenting Para and Alex’s work.  Anssi suggests that we can use the wisdom of the crowds to anser the questions.

Idea: Separate music into components, some components may be more reliable. 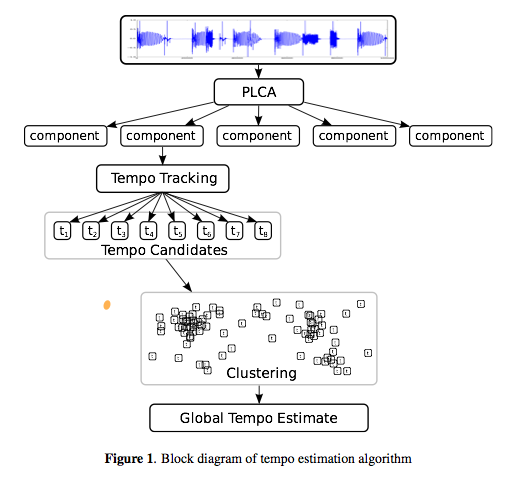 PLCA is a source separation method (Probablistic Latent Component Analysis).  Issues: Number of components need to be specified in advance.  Could merge sources or one source could be split into multiple layers.

Autocorrelation is used for tempo detection.  Regular sources will have higher peaks.

Global Tempo using Clustering – merge all tempo candidates into single vector (and others within a 5% tolerance (and .5x and 2x), to give a peak histogram showing confidence for each tempo.

Question: How many sources were specified to PLCA, Answer: 8. George thinks it doesn’t matter too much.

Question: Other papers show that similar techniques do not show improvement for larger datasets

By Peter Grosche and Meinard Müller

Example – a waltz – where the downbeat is not too strong compared to beats 2 & 3.   It is hard to find onsets in the energy curves.  Instead, use:

This yields a novelty curve, which can be used for onset detection.  Downbeats are missing. How to beat track this? compute tempogram – a spectrogram of the novelty curve.  This yields a periodicity kernel.  All kernels are combined to obtain a single kernel – rectified – this gives a predominate local pulse curve. The PLP curve is dynamic but can be constrained to track at the bar, beat or tatum level.

Issues: PLP likes to fill in the gaps – which is not always appropriate.  Trouble with the Borodin String Quartet No. 2. But when tempo is tightly constrained, it works much better.

This was a very good talk. Meinard presented lots of examples including examples where the system did not work well.

Question:  Realtime? Currently kernels are 4 to 6 seconds. With a latency of 4 to 6 seconds it should work in an online scenario.

Question: How different from DTW on the tempogram?  Not connected to DTW in anyway.

Question: How important is the hopsize? Not that important since a sliding window is used.

This entry was posted on October 27, 2009, 2:29 am and is filed under ismir, Music, music information retrieval, research. You can follow any responses to this entry through RSS 2.0. Both comments and pings are currently closed.