Last night I was watching the pilot for Glee (a snarky TV version of High school musical) with my 3 teenage daughters.  I was surprised to hear the soundtrack filled with songs by the band Journey, songs that  brought me back to my own high school years.   The thing that I like the most about Journey is that many of their songs have this slow and gradual build up over the course of the whole song  as in this song Lovin Touchin Squeezin:

A number of my favorite songs have this slow build up. The canonical example is Zep’s ‘Stairway to Heaven’ – it starts with a slow acoustic guitar and over the course of 8 minutes builds to metal frenzy.    I thought it would be fun to see if I could write a bit of software that could find the songs that have the same arc as ‘Stairway to Heaven’ or ‘Lovin, Touchin Squeezin’  – songs that have this slow build. With this ‘stairway detector’  I could build playlists filled with the songs that fire me up.

The obvious place to start with is to look how the loudness of a song changes overtime. To do this I used the Echo Nest developer API to extract the loudness as a function of time for  Journey’s Lovin, Touchin Squeezin:

In this plot the light green curve is the loudness, while the blue line is a windowed average of the loudness.  This plot shows a nice rise in the volume over the course of the song.   Compared to a song like the Beatles ‘Ticket to Ride’ that doesn’t have this upward slope:

Here are a few more songs that fit the ‘slow build’ profile:

‘Stairway to Heaven’ has a score of 1.6 so it has a bigger build than Journey’s Lovin’.

Simon and Garfunkle’s ‘Bridge over troubled water’ has an even bigger build with a score of 1.7. 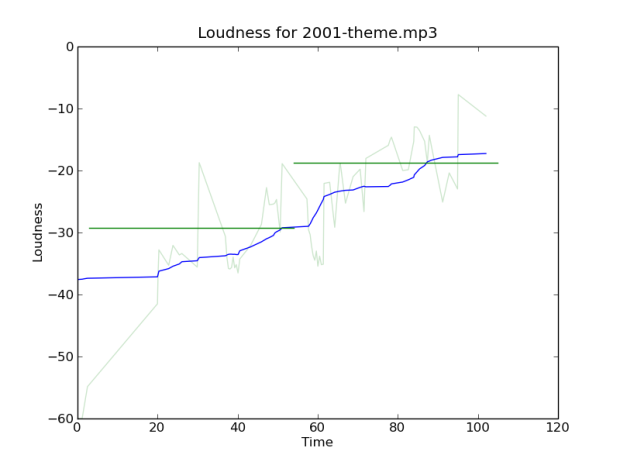 Also sprach Zarathustra has a more modest score of  1.56

With this new found metric I analyzed a few thousand of the tracks in my personal collection to find the songs with the biggest crescendos.  The biggest of all was this song by Muse with a whopping score of  3.07: 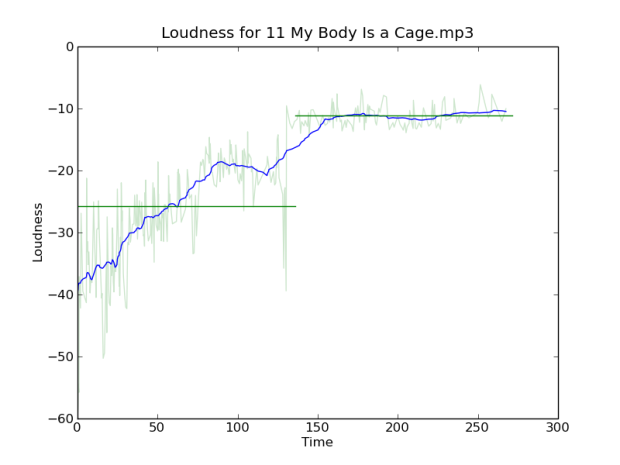 The metric isn’t perfect. For instance, I would have expected Postal Services ‘Natural Anthem’ to have a high score because it has such a great build up, but it only gets a score of 1.19. Looking at the plot we can see why: 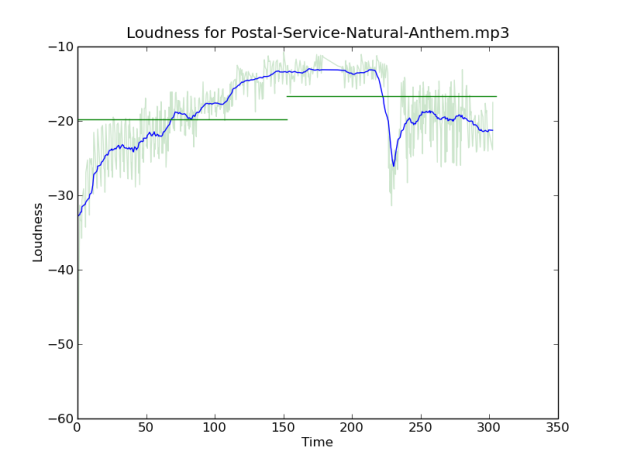 After the initial build up, there’s a drop an energy for that last quarter of the song, so even though the song has a sustained crescendo for 3 minutes it doesn’t get a high score due to this drop.

Of course, we can use this ratio to find tracks that go the other way, to find songs that gradually wind down. These seem to occur less frequently than the songs that build up.  One example is Neutral Milk Hotel’s Two Headed Boy:

Despite the fact that I’m using a very naive metric to find the loudness slope,  this stairway detector is pretty effective in finding songs that have that slow build.   It’s another tool that I can use for helping to build interesting playlists.  This is one of the really cool things about how the Echo Nest approaches music playlisting.   By having an understanding of what the music actually sounds like,  we can build much more interesting playlists than you get from genius-style playlists that only take into account  artists co-occurrence.

This entry was posted on August 17, 2009, 10:30 am and is filed under data, fun, Music, playlist, The Echo Nest, web services. You can follow any responses to this entry through RSS 2.0. Both comments and pings are currently closed.