Every week, thousands of artists release albums on Spotify.  Sifting through all this new music to find good stuff to listen to can be hard. Luckily, there are lots of tools from New Music Tuesday playlists to the Spotify Viral 50 to help us find the needles in the proverbial haystack of new music. However, most of these tools tend to surface up new music by artists that have been around for a while. For instance, the top artist on Spotify Viral 50 as I write this is Jeremih who has been on the charts for five years. The top of New Music Tuesday right now is Mumford & Sons who’ve been recording for at least eight years.

I’m interested in finding music by the freshest artists – artists that are at the very beginning of their recording careers. To that end, I’ve built a new chart called ‘The Fresh 40’ that shows the top albums by the freshest artists. To build The Fresh 40 I scour through all of the albums that have been released in the last two weeks on Spotify (on average that’s about 30 thousand albums), and find the albums that are the very first album release for its artist. I then rank each album by a weighted combination of the number of followers the artist has on Spotify and the popularity of the artist and album (which is related to Spotify track plays). The result is a chart of the top 40 most popular fresh artists. 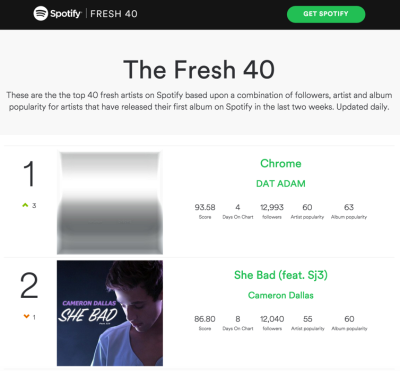 The Fresh 40 updates every day and shows all the salient info including the rank, yesterday’s rank, the overall score, artist followers, artist popularity, album popularity and the number of days that the album has been on the chart. Since an album can only be on the chart for 15 days, there’s quite a bit of change from day to day.

The Fresh 40 was built on top of the increasingly marvelous Spotify Web API.  Code is on github.

Fetching My Starred Items from Spotify

I wrote a quick demo that shows how to create a web app that fetches the starred items for a Spotify user via the nifty new Spotify Web API.  The demo will first solicit permission from the user, and if the user grants such permissions, the app will then retrieved the starred list and show the tracks in a simple list. 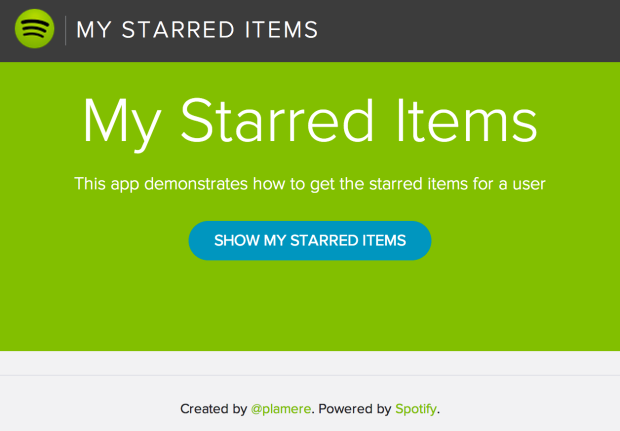 The online demo is here: My Starred Items. The source is on github.