This weekend, Music Hack Day returned to the city where it all began. On Saturday morning, nearly 200 hackers arrived with the hottest hackathon tickets at the Shoreditch Works Village Hall, in Hoxton Square to spend the weekend exercising their passion for music and technology. After 24 hours of hacking, over 50 hacks were built – hacks that let you explore, discover, arrange, create and play with music. 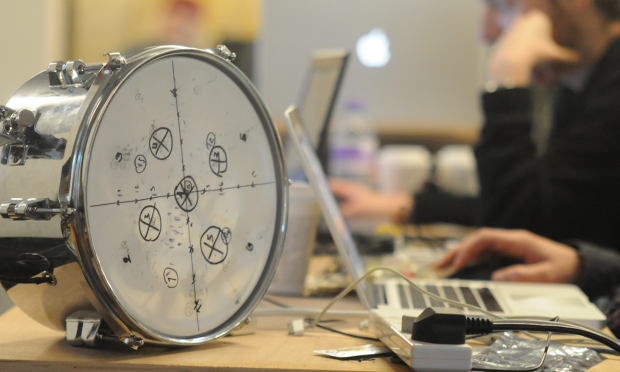 Augdrum – Hacked drum for use in ‘expressive’ performance

I’ve been to many Music Hack Days, and I must say this was a special one. It had all the magical ingredients to make this the perfect event. First, the Shoreditch Works Village Hall was the ideal hacking venue. 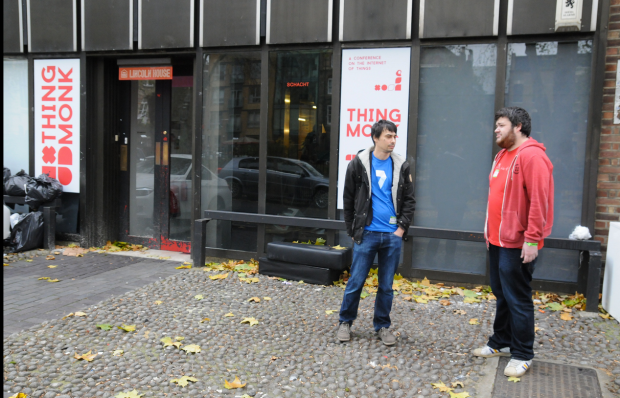 Getting ready to hack at the Shoreditch Works Village Hall

It is located in the heart of London’s exploding tech community, surrounded by pubs and restaurants (in my five minute walk from the hotel to the Village Hall, I walked past a dozen pubs).  The Village Hall had perfect power and ample bandwidth for 200 data-starved hackers. The hackathon was sold out and everyone showed up, so we were all tightly packed into the hall – adding to the crazy energy. There’s a coffee shop connected to the hall where baristas were preparing coffee for the hackers long into the night.

Food was not your standard hacker pizza – it was “modern British slow cooking” provided by the Bow Street Kitchen.  It really added to the London vibe. 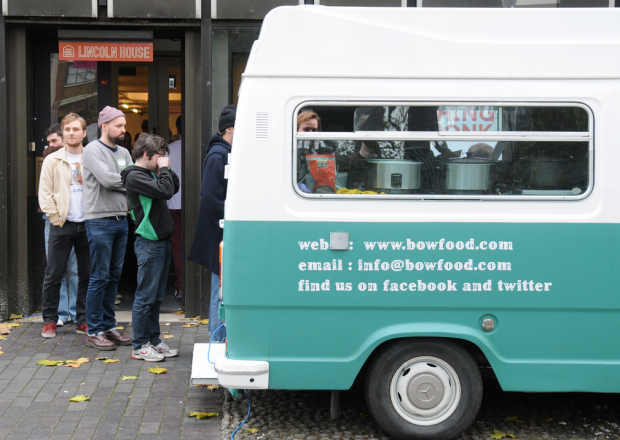 Finally, Thomas Bonte of MuseScore was in attendance – Thomas is the official photographer of Music Hack Day. He’s been taking pictures of MHD since the very first one. He takes great pictures and makes them all available on Flickr via Creative Commons. Check out his full set of the event on Flickr. He took nearly all the photos in this blog post except for this one:

Since the event was sure to sell out (everyone wants to go to a London Music Hack day), only the most motivated hackers were able to get tickets. Motivated hackers are the best kind of hackers.

These are the folks that arrive early, stay late, work hard and finish their hacks on time – leading to a very high level of hacks being built. 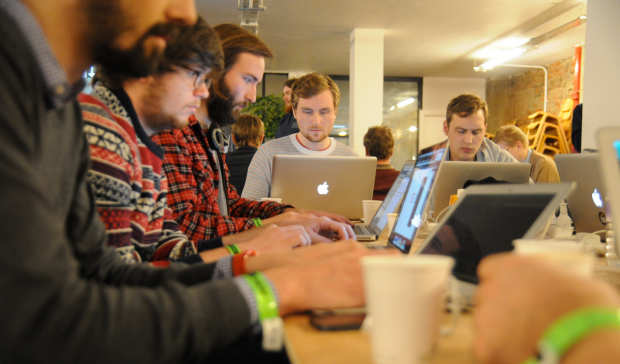 The event kicked off with organizer Martyn Davies providing opening remarks, followed by API presentations by various companies.  By 2PM hacking was in full swing.

A new and awesome twist to the demo session was provided by Becky Stewart’s hack. She created #mhdbingo – a set of custom bingo cards filled with common Music Hack Day tropes and memes. Each hacker received a unique bingo card to fill out during the demo session. Bingo wins were recorded by tweets with the #mhdbingo hashtag.  Here’s a sample bingo card:

It’s the center square that’s the most interesting.

Becky’s hack not only provided a little humor for the demo session, but was a great tool to keep the attendees focused on the demo during the nearly 3 hour demo session. There was a point near the end of the demo session when seemingly dozens of folks were praying for a hack that showed ‘tracks on a map’ – and yes, their prayers were answered.  Becky’s hack is on Github and she accepts pull requests so if you have suggestions for more MHD memes and tropes go ahead and add them and submit the pull requests. I’m sure #mhdbingo will become a fixture at future Music Hack days.

Some of my favorite hacks of the weekend are:

Becky combines Latex and Bingo to reshape Music Hack Day forever. Sitting behind her is someone else who, 10 years ago, reshaped music forever

notepad – Draw a piano on a paper pad, and start playing it!

These are your Burns – takes your favourite bit of audio at the moment (Your ‘jam’ if you will) and creates a beautiful collage of memes, informed by the lyrics of the song, and presents them in a familiar documentary style.

MidiModulator – This Python script will take a song and modulate the pitch with the melody of a chosen score (basically, another song). Think of it as FM, except instead of a frequency we take an entire Christmas carol.

playsongsto.me –  a collaborative playlist tool with a difference – you have to convince your friends to keep adding tracks faster than you can listen to them or face the consequences!  This hack was created by Ross Penman – the youngest hacker to demo a project. I really liked his  unique double twist on the party playlister.

album pairs – a nearly ready for the iOs App Store is the Album Pairs app by Iain Mullan – its an album cover matching game – when you make the match the corresponding song is added to the playlist. 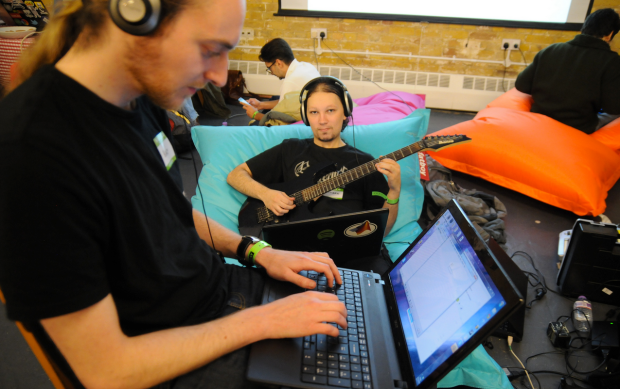 best new sounds at the hack

The top popular crowd favorite was Lifesong. This hack was written by Ben Nunney entirely on an Amstrad 1512 – a mid-80s PC with 512k RAM and a 4Mhz processor. It’s based in Pascal with a BASIC wrapper around it.

Since this computer has no network, audio out, or video out, Ben had to resort to some unusual methods to demo his hack.

It was a really fun demo session. There were lots of unique hacks. See the full list on hacker league. Many APIs were used including Spotify, Deezer, Songkick, Last.fm, Twilio, SoundCloud, Discogs, MuseScore, MusicMetric and more. I was especially pleased to see that several dozen hacks use our Echo Nest API to make cool hacks. 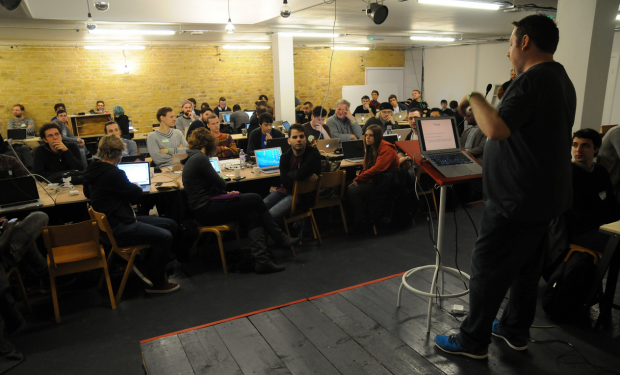 Thanks to Thomas Bonte for all the photos used in this post. Be sure to see the full set.

This weekend, I’ve been in London, attending the London Music Hack Day. For this weekend’s hack, I was inspired by daughter’s music listening behavior – when she listens to music, she is good for the first verse or two and the chorus, but after that, she’s on to the next song. She probably has never heard a bridge.  So for my daughter, and folks like her with short attention spans, I’ve built Attention Deficit Radio. ADR creates a Pandora-like radio station based upon a seed artist, but doesn’t bother you by playing whole songs. Instead, after about 30 seconds or so, it is on to the next song. The nifty bit is that ADR will try to beat-match and crossfade between the songs giving you a (hopefully) seamless listening experience as you fly through the playlist. Of course those with short attention spans need something to look at while listening, so ADR has lots of gauges that show the radio status – it shows the current beat, the status of the cross-fade, tempo and song loading status.

There may be a few rough edges, and the paint is not yet dry, but give Attention Deficit Radio a try if you have a short listening attention span.

Johnny Cash Has Been EVERYWHERE (Man)!

My favorite hack to come out of last week’s Music Hack Day London (and perhaps one of my favorite music hack of all time) is the hack by Iain Mullan called “Johnny Cash Has Been EVERYWHERE (Man)!“.  This hack has all the ingredients of a great music hack – great music, great execution, a bucket full of whimsy, and absolutely nothing about it that would make an MBA start writing a business plan.  It’s practically a perfect hack.  The only flaw is that Johnny Cash would never measure his distance travelled in kilometers. Check it out:    Johnny Cash Has Been EVERYWHERE (Man)!“.