Austin climbing the Most Musical City chart with a bullet!

I’ve received quite a bit of feedback on my recent Most Musical City post, especially from folks from Austin that didn’t like Austin’s 14th place ranking.  This reddit/austin comment thread was rather brutal, and this Austinist article Wait, What?! Austin Not Ranked In Top 10 Musical Cities List even closed with this appeal: any data analysts out there up for the challenge to get Austin closer to the top?

Well, John Rees,  the Director of Community & Economic Development at Capital Area Council of Governments in Austin is just the data analyst that the Austinist was looking for.  He re-ran the analysis but instead of using city populations he calculated the rankings based upon metropolitan statistical areas.    In the May issue of Data Points Newsletter John reports on this analysis:

When data from The Echo Nest is adjusted to include metropolitan statistical area population data, the rankings of America’s most musical places changes significantly.  Topping the list is Nashville, San Francisco and Los Angeles (which includes Beverly Hills). The Austin region jumps ten places from the original list to become America’s forth [sic] most musical region. 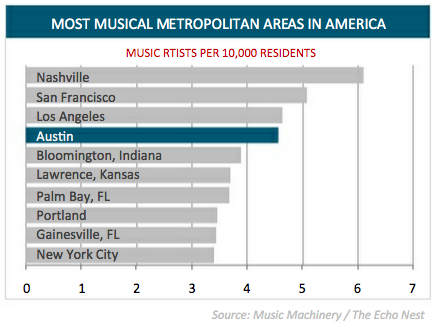 John goes on to point out some of the non-quantifiable aspects of the Austin music scene such as the diversity of music as well as the presence of events such as SXSW and Austin City Limits.  John makes a strong argument that Austin is one of the country’s premier music destinations.  Even the reaction of Austin’s residents to my post says a lot about Austin as a music city. People from Austin really care about music and don’t take it kindly when they are not at the top of the most musical city list.   So congrats to Austin, not just for moving up the chart but also for demonstrating that Austin is the city that is most passionate about music