A few years back I created a data set of social tags from Last.fm. RJ at Last.fm graciously gave permission for me to distribute the dataset for research use.  I hosted the dataset on the media server at Sun Labs. However, with the Oracle acquisition, the media server is no longer serving up the data, so I thought I would post the data elsewhere.

The dataset is now available for download here: Lastfm-ArtistTags2007

Here are the details as told in the README file:

Is that a million songs in your pocket, or are you just glad to see me?

Yesterday, Steve Jobs reminded us that it was less than 10 years ago when Apple announced the first iPod which could put a thousand songs in your pocket.  With the emergence of cloud-based music services like Spotify and Rhapsody, we can now have a virtually endless supply of music in our pocket.  The  ‘bottomless iPod’ will have as big an effect on how we listen to music as the original iPod had back in 2001.  But with millions of songs to chose from, we will need help finding music that we want to hear.  Shuffle play won’t work when we have a million songs to chose from.  We will need new tools that help us manage our listening experience.  I’m convinced that one of these tools will be intelligent automatic playlisting.

This weekend at the Music Hack Day London, The Echo Nest is releasing the first version of our new Playlisting API.  The Playlisting API  lets developers construct playlists based on a flexible set of artist/song selection and sorting rules.  The Echo Nest has deep data about millions of artists and songs.  We know how popular Lady Gaga is, we know the tempo of every one of her songs,  we know other artists that sound similar to her, we know where she’s from, we know what words people use to describe her music (‘dance pop’, ‘club’, ‘party music’, ‘female’, ‘diva’ ).  With the Playlisting API we can use this data to select music and arrange it in all sorts of flexible ways – from very simple Pandora radio style playlists of similar sounding songs to elaborate playlists drawing on a wide range of parameters.  Here are some examples of the types of playlists you can construct with the API:

We have also provide a dynamic playlisting API that will allow for the creation of playlists that adapt based upon skipping and rating behavior of the listener.

I’m about to jump on a plane for the Music Hackday London where we will be demonstrating this new API and some cool apps that have already been built upon it.    I’m  hoping to see a few apps emerge from this Music Hack Day that use  the new API.  More info about the APIs and how you can use it to do all sorts of fun things will be forthcoming.  For the motivated dive into the APIs right now.

Upbeat and Quirky, With a Bit of a Build: Interpretive Repertoires in Creative Music Search

Upbeat and Quirky, With a Bit of a Build: Interpretive Repertoires in Creative Music Search
Charlie Inskip, Andy MacFarlane and Pauline Rafferty 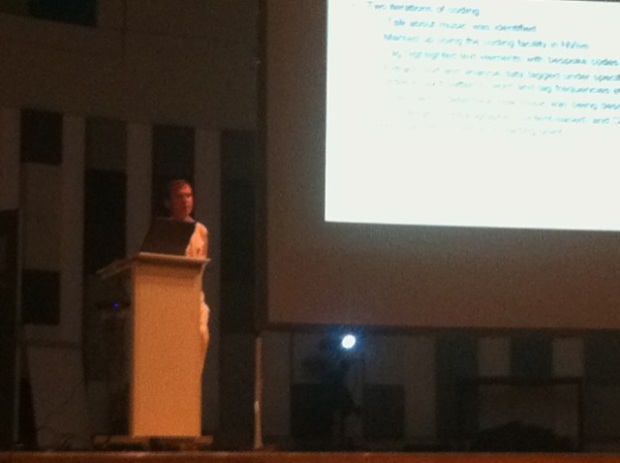 ABSTRACT Pre-existing commercial music is widely used to accompany moving images in films, TV commercials and computer games. This process is known as music synchronisation. Professionals are employed by rights holders and film makers to perform creative music searches on large catalogues to find appropriate pieces of music for syn- chronisation. This paper discusses a Discourse Analysis of thirty interview texts related to the process. Coded examples are presented and discussed. Four interpretive re- pertoires are identified: the Musical Repertoire, the Soundtrack Repertoire, the Business Repertoire and the Cultural Repertoire. These ways of talking about music are adopted by all of the community regardless of their interest as Music Owner or Music User.

Music is shown to have multi-variate and sometimes conflicting meanings within this community which are dynamic and negotiated. This is related to a theoretical feedback model of communication and meaning making which proposes that Owners and Users employ their own and shared ways of talking and thinking about music and its context to determine musical meaning. The value to the music information retrieval community is to inform system design from a user information needs perspective. 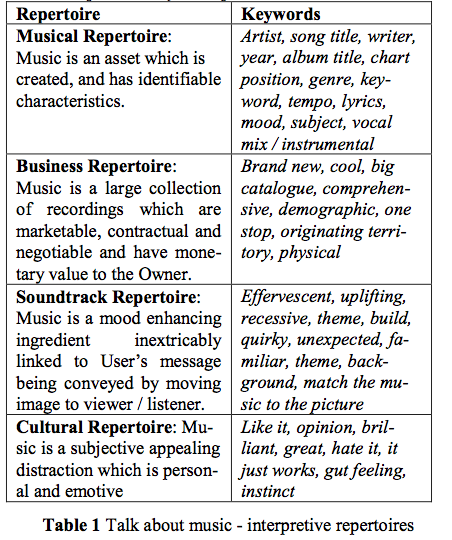 ABSTRACT – The automated extraction of tempo and beat information from music recordings is a challenging task. Especially in the case of expressive performances, current beat tracking approaches still have significant problems to accurately capture local tempo deviations and beat positions. In this paper, we introduce a novel evaluation framework for detecting critical passages in a piece of music that are prone to tracking errors. Our idea is to look for consistencies in the beat tracking results over multiple performances of the same underlying piece. As another contribution, we further classify the critical passages by specifying musical properties of certain beats that frequently evoke trac ing errors. Finally, considering three conceptually different beat tracking procedures, we conduct a case study on the basis of a challenging test set that consists of a variety of piano performances of Chopin Mazurkas. Our experimental results not only make the limitations of state-of-the-art beat trackers explicit but also deepens the understanding of the underlying music material. 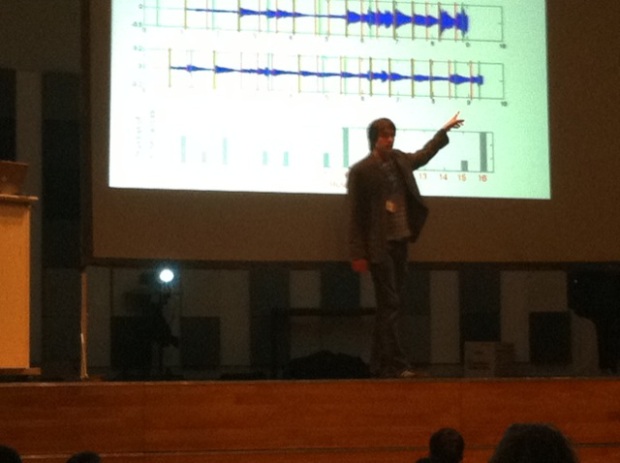 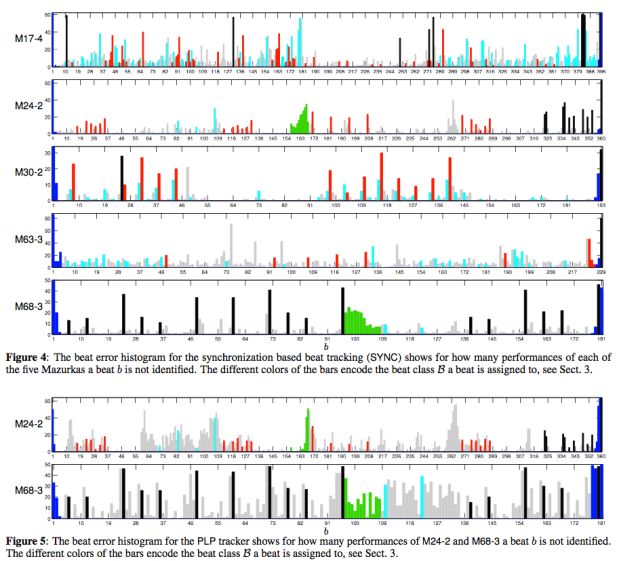 An Audio Processing Library for MIR Application Development in Flash

The Audio processing Library for Flash affords music-IR researchers the opportunity to generate rich, interactive, real-time music-IR driven applications. The various lev-els of complexity and control as well as the capability to execute analysis and synthesis simultaneously provide a means to generate unique programs that integrate content based retrieval of audio features. We have demonstrated the versatility and usefulness of ALF through the variety of applications described in this paper. As interest in mu sic driven applications intensifies, it is our goal to enable the community of developers and researchers in music-IR and related fields to generate interactive web-based media. 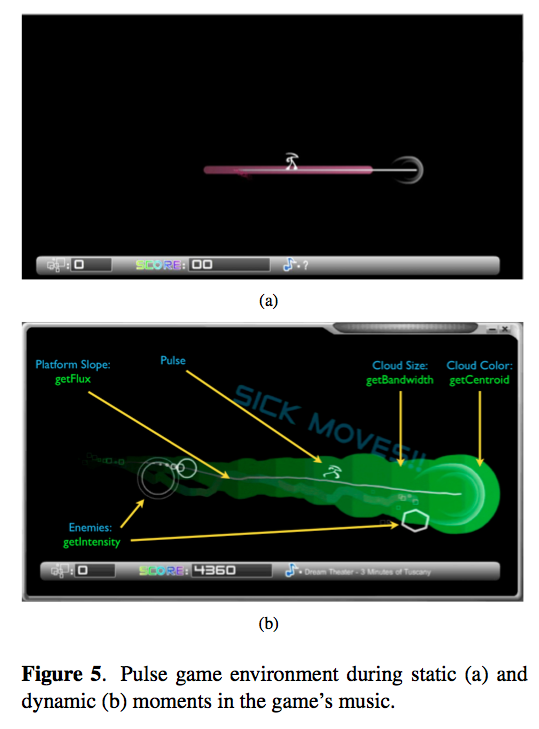 Music21: A Toolkit for Computer-Aided Musicology and Symbolic Music Data

ABSTRACT – Music21 is an object-oriented toolkit for analyzing, searching, and transforming music in symbolic (score- based) forms. The modular approach of the project allows musicians and researchers to write simple scripts rapidly and reuse them in other projects. The toolkit aims to pro- vide powerful software tools integrated with sophisticated musical knowledge to both musicians with little pro- gramming experience (especially musicologists) and to programmers with only modest music theory skills.

Music21 looks to be a pretty neat toolkit for analyzing and manipulating symbolic music.  It’s like Echo Nest Remix for MIDI.  The blog has lots more info: music21 blog.  You can get the toolkit here:  music21 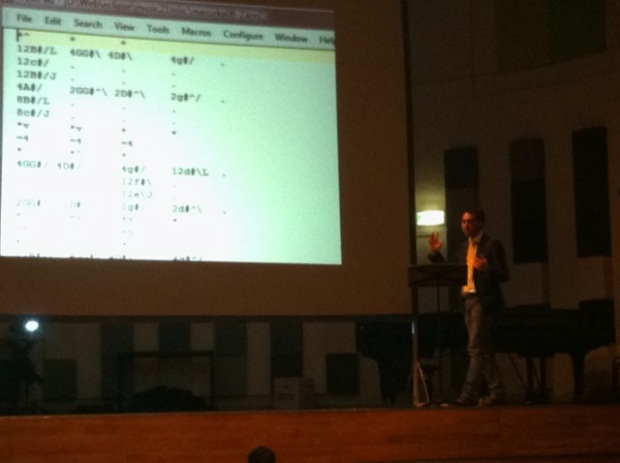 ABSTRACT – Humans tend to organize perceived information into hierarchies and structures, a principle that also applies to music. Even musically untrained listeners unconsciously analyze and segment music with regard to various musical aspects, for example, identifying recurrent themes or detecting temporal boundaries between contrasting musical parts. This paper gives an overview of state-of-the- art methods for computational music structure analysis, where the general goal is to divide an audio recording into temporal segments corresponding to musical parts and to group these segments into musically meaningful categories. There are many different criteria for segmenting and structuring music audio. In particular, one can identify three conceptually different approaches, which we refer to as repetition-based, novelty-based, and homogeneity- based approaches. Furthermore, one has to account for different musical dimensions such as melody, harmony, rhythm, and timbre. In our state-of-the-art report, we address these different issues in the context of music structure analysis, while discussing and categorizing the most relevant and recent articles in this field. 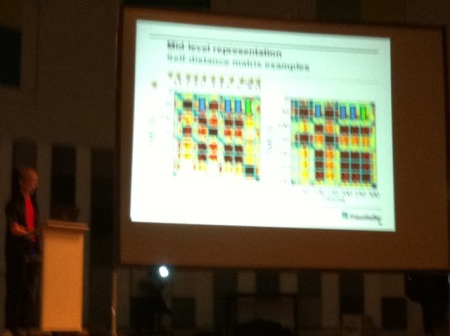 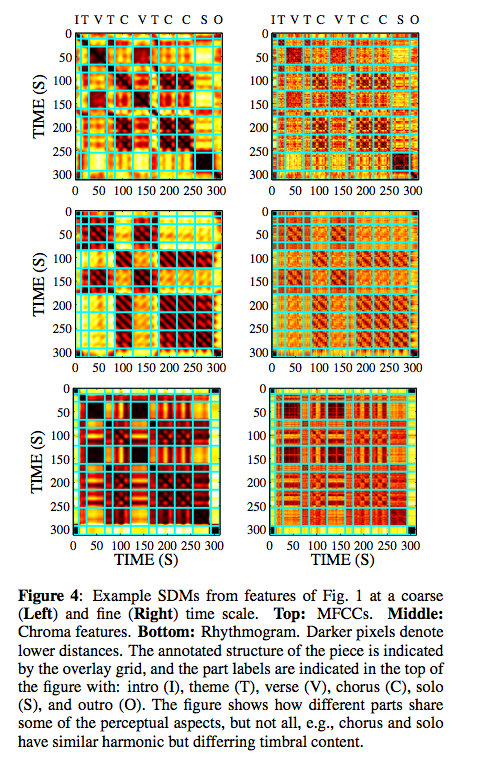 This presentation is an overview of the music structure analysis problem, and the methods proposed for solving it. The methods have been divided into three categories: novelty-based approaches, homogeneity-based approaches, and repetition-based approaches. The comparison of different methods has been problematic because of the differring goals,  but current evaluations suggest that none of the approaches is clearly superior at this time, and that there is still room for considerable improvements.

Notes from the ISMIR business meeting – this is a meeting with the board of ISMIR. 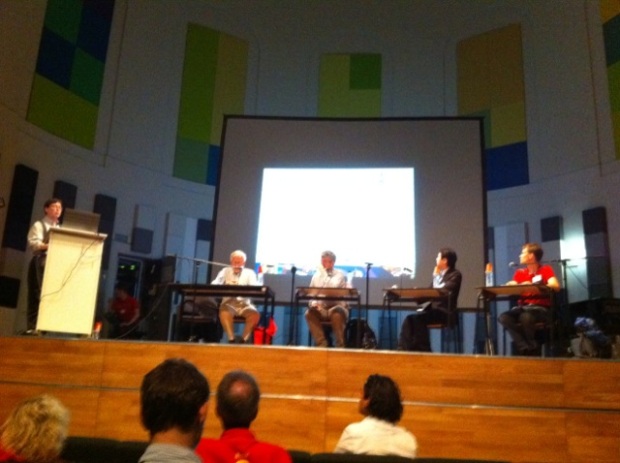 Doug snuck in the secret word ‘youtube’ too, just for those hanging out on IRC. 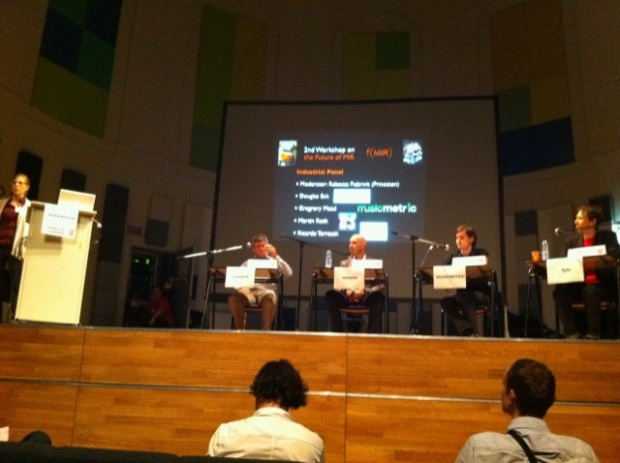 Rebecca is the moderator.

What do you think is the next big thing? How is tech going to change things in the near future?

How will tech revolutionize music?

What are the most interesting problems or technical questions?

How would you characterize the relationship between biz and academia

Good panel, lots of interesting ideas.  Here is the future of music: 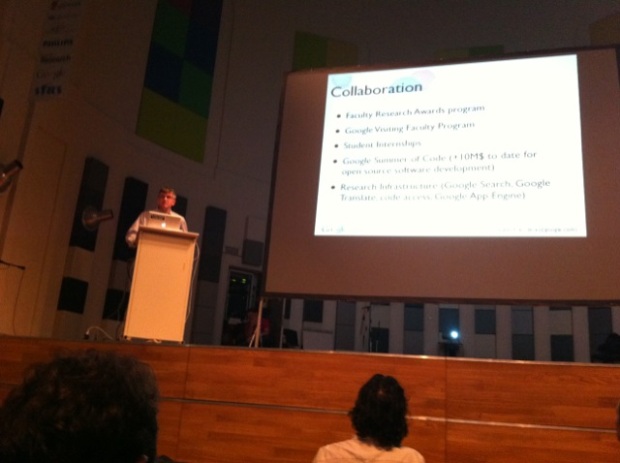 The Future of MIR is already here

What would you like Google to give back to MIR?