Music Hack Day NYC has just wrapped up, and what a great weekend it was!. Hosted at Spotify’s spiffy new headquarters in midtown, Music Hack Day NYC was the place to be if you are passionate music, technology and building stuff. During all night Friday and all day Saturday, hundreds of hackers used music APIs from companies like The Echo Nest, Soundcloud, Gracenote, Rdio and of course Spotify, to build next generation music apps.

It was a really fun event. The Spotify headquarters are perfect for hacking. Flawless and apparently limitless wifi/bandwidth, awesome A/V setup, and great sound for an unending social hacking playlist.

Over the course of about 20 hours of hacking, 36 hacks were built and demoed.  There was quite a range of inventive hacks. Some of my favorites:

EERFY
The crowd favorite was Oscar Celma’s extremely clever EERFY – He solved the Music Industry Problem in 24 hours by turning it upside down with EERFY:

halfstep
Another favorite was Leo and Jason’s halfstep –  a chrome extension that motivates you to move more. How? If you only moved 20% of your movement goal yesterday, then halfstep will also let you listen to first 20% of any songs today. Check out the screencast of their hack.

PartyOutlook
There were lots of great Echo Nest hacks including the Echo Nest prize winner partyOutlook by Matt Egan. PartyOutlook is a CocoaLibSpotify powered iPad jukebox that accepts tracks via the Twillio API and displays real-time information about the life of the party using Echo Nest song data. Allows an administrator to pause and play music, as well as skip tracks.

TuneTravelr
Another really neat Echo Nest hack was TuneTravelr created by Chris Evans and Joshua Boggs. Tune Travelr  is a web app that  takes cities and locales a well as a time period and returns a  playlist of songs that were hot at the time. It uses the Echo Nest data to leverage some analytic querying, before pipping the results into Rdio’s web API for playback. MoodVenue
MoodVenue used The Echo Nest API to help find out what’s going on tonight based on your mood and location.

Repetition faceoff
Artists fight to the death, using only the sheer repetitive force of their music! By Brian McFee. Brian used the Echo Nest analysis data to build a custom metric for repetition for any song and used that to score songs by the artist for the face-off.

Cheese Tray
A novel use of The Echo Nest API was Cheese Tray – A  Spotify app that takes selects randomly from among your Spotify playlists and analyzes it. It then adds to that playlist a song that best represents the average attributes of the playlist, as given by The Echo Nest API. Then, via SMS through the Twilio service, it sends a command to your Android device that changes its background to the album artwork for that average song.

Songs About
Uses wikipedia articles titled ‘List of songs about…” to generate Spotify/Rdio playlists about different subjects/places. Songs about used The Echo Nest’s Rosetta Stone to get the song IDs for playing in Spotify and Rdio.

Awesome Chart Explorer
This is my hack. A visualization that lets you explore and listen to 50 years of Billboard charts.

All in all, it was a great event with lots of awesome, innovative hacks and lots of smart people. A good time was had by all.  Thanks to Spotify and @mager for organizing the event. Well Done! 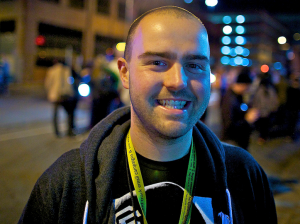 This entry was posted on October 21, 2013, 11:54 am and is filed under code, events, fun, hacking, Music, music hack day, The Echo Nest. You can follow any responses to this entry through RSS 2.0. Both comments and pings are currently closed.