The first ever Music Hack Day Chicago was held this past weekend.  It was hosted in the best hacking space ever: Blue 1647 – there was plenty of bandwidth, power, food, hacking fuel and unending music to keep us hacking all weekend. I was quite impressed with the technical chops and the creativity of those in attendance.  There was an unusually high ratio of novel hacks at this event – and many had a very  high degree of technical difficultly  – so Well Done Chicago! Here are some of my favorite hacks: 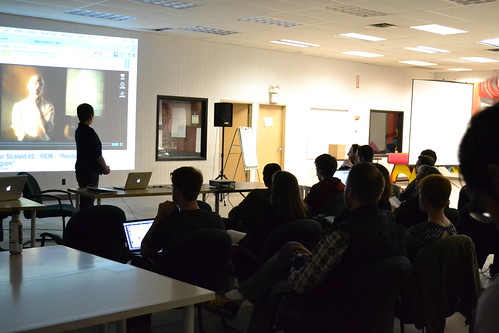 modeshifter – by Hannah Roberston – Hannah’s goal is to build an automatic mode shifter that will take a song and generate a new version of it in a major (or minor) key.  Here’s an example of the goal:

Hannah’s added an extra degree of difficulty by doing this all in Javascript, in the browser.  It’s quite an ambitious undertaking.  She completed the first part of her hack – extracting the fundamental frequencies via a comb filter. Next step (in a future hack day) is to shift the frequencies and add them back in. I’m looking forward to hearing the results.

jambox – by Marcell Purham – This is my favorite kind of hack. Marcell is a student at nearby University of Illinois. Marcell had never used a music API before, but in the 24 hour hackathon, was able to use The Echo Nest and the Rdio APIs to build a nifty music discovery app that runs on web (including the Mobile Web).   Marcell won the Rdio prize for his efforts. 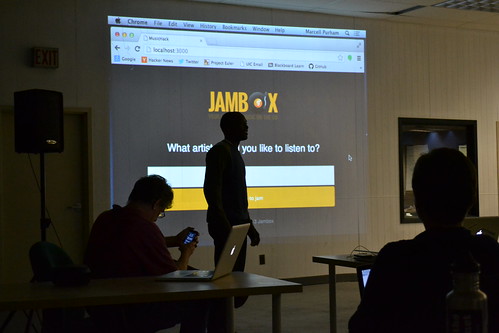 Sectionizer – by Nathan Leiby – Winner of The Echo Nest prize – For this hack Nathan took a close look at how a song can be automatically broken up into labelled sections such as intro, verse, pre-chorus, chorus and outro.

Using visualizations and heuristics, Nathan was able to identify section boundaries accurately across a wide range of songs.

GearSpotting – by the Reverb Hacking team –  This hack lets you tag your favorite videos with the gear the artists are using, then find out what it’s worth in the Reverb PriceGuide, or buy similar items on Reverb.

Molecular Dynamics Sonification – by Josiah Zayner – Molecular Dynamics is the process of creating a 3D simulation of physical processes on the nanoscale. Scientists use this to predict how proteins, DNA and other macromolecules function. The data generated by these simulations is massive, highly multi-dimensional and very difficult to comprehend. By analyzing simulations and sonifying the different types of data (changes is secondary structure, radius of gyration and root mean square deviation)  this hack creates  a way to both auditorilly and visually experience the data to provide a much higher level of comprehension. 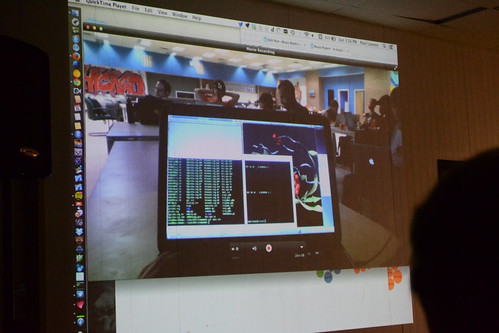 Record Store Day – by @mattdennewitz. – creates a database of record stores from the Record Store Day website. Its a nifty bit of open source code,  – the ultimate goal is to make it easy to embed record store information directly into Pitchfork reviews: 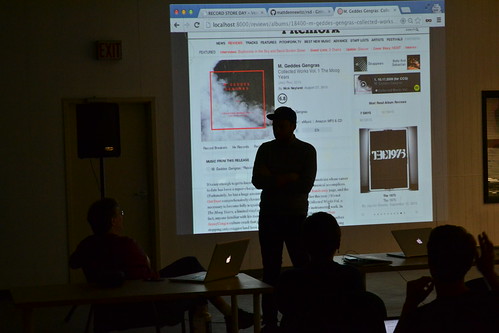 Music Popcorn – this is my hack – Music Popcorn is a music exploration tool that allows you to explore the world of music via the many hundreds of music genres. Genres are grouped into higher level families and are sized based upon their overall popularity.

This entry was posted on September 24, 2013, 2:53 pm and is filed under Music. You can follow any responses to this entry through RSS 2.0. Both comments and pings are currently closed.