The Way Out West Hack Battle 2

The Way Out West Hack Battle 2, a 2 day music hackathon conducted in conjunction with the Way Out West music festival in Gothenburg Sweden shows that when in comes to music hacking, there’s no place like Sweden.  In 24 hours of hacking the 125+ hackers put together a total of 32 hacks.  These hacks were some of the most clever and innovative set of hacks put together at any hackathon. 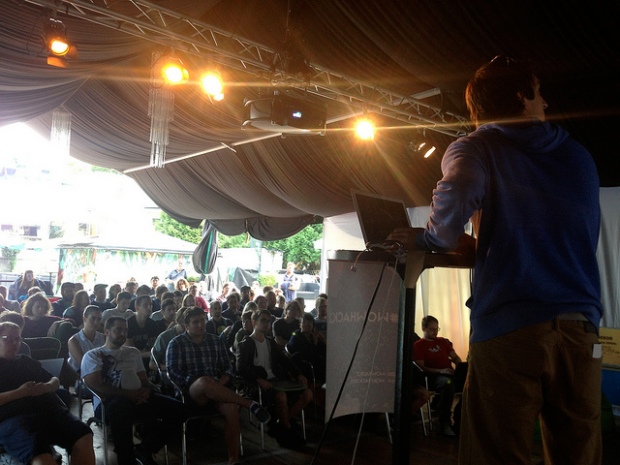 Music MAP – Music MAP is a Spotify app that lets you explore the world of music using a 3D globe. You can narrow your search down to country or region and filter the searches by genre and year. Looking for blues artists from the 1950s from Mississippi? The Music MAP can help you out.   Music MAP was one of the winners of the Echo Nest Prize.

Lego Rock Raiders  – This team built a Guitar Hero style game that you play by smashing on fruit (yes, real, juicy, sticky, messy fruit) that is connected to your computer (via makeymakey of course).  This team used the Echo Nest API to find the notes and beats used to drive the game. Quite fun and creative.  This hack also won an Echo Nest prize.

Other notable Echo Nest hacks were:

I had a great time at the event. I got to meet some really interesting folks.  I sat next to Jens Nockert for much of the weekend.  Jens is famous for writing audio decoders in Javascript. I hope he works for the Echo Nest some day.  Jens was kind enough to let me tether through his iPhone so I could submit my hack when the local wifi connection to the Internet was getting overloaded.

The Oculus Rift in action

I also got to chat with Per-Olov Jernberg.  He brought an Oculus Rift to the hackathon and built a really nifty 3D music explorer with it.  I got my first try with the 3D virtual reality goggles and I was really impressed with it. Quite immersive.  Per-Olov is quite the hacker – he’s been adding  Oculus Rift support to three.js.  I was excited to hear that he’s joined the Spotify team and may be applying some of his considerable hacking skills to improving their API.

Hacking with SendGrid, Chalmers, and Facebook folk at #wowhack2 (Photo by Andrew Mager)

I also met a number of students from Chalmers University – they were a pretty innovative and tech savvy bunch of folks.

#wowhack2 was a really great hackathon. Thanks to Paul Sonkamble and Andrew Mager for organizing such a cool event. Now for a day or two of exploring the Gothenburg city and countryside. It really is a beautiful part of the world.

This entry was posted on August 9, 2013, 4:12 am and is filed under Music. You can follow any responses to this entry through RSS 2.0. Both comments and pings are currently closed.