Is music getting more profane?

This post has profanity in it. If you don’t like profanity, skip this post and instead just look at this picture of a cat. Otherwise, scroll on down to read about the rise and fall of profanity in music. 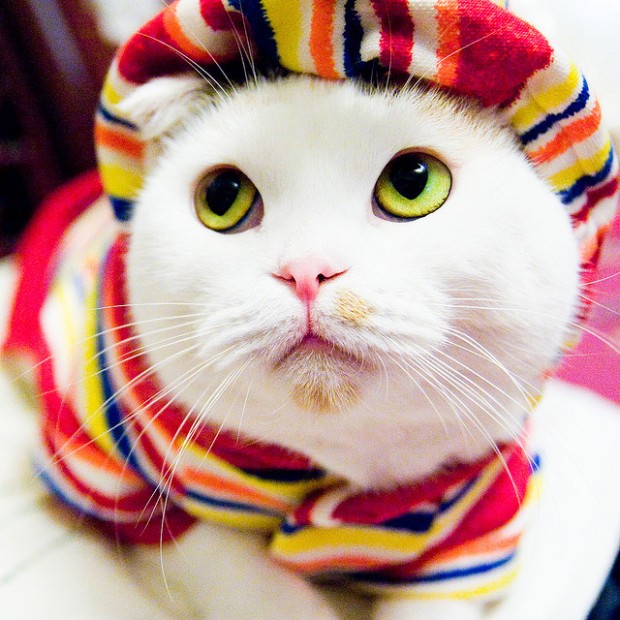 Now, on to the profanity …

It seems that every year the amount of profanity in music has increased. Today it seems that every other pop song drops the f-bomb, from P!nk’s ‘Fucking Perfect’ to Cee Lo’s ‘Fuck You’.   I wondered if this apparent trend was real so I took a look at when certain obscene words started to show up in song titles to see if there are any obvious trends.  Here’s the data:

The word ‘fuck’ doesn’t appear in a song title until 1977 when the band ‘The Way’ released ‘Fucking Police’ .  This monumental song in music history seems to be lost to the Internet age.  The only evidence that this song ever existed is this MusicBrainz entry.   The second song with ‘fuck’ in the title, ‘To Fuck The Boss’ by Blowfly appeared in 1978.  This sophmore effort is preserved on Youtube:

Usage of the word ‘shit’ has a similar profile:

The first usage of the word ‘shit’ in a song title was in 1966 in the song ‘I feel like homemade shit’ by The Fugs, which appeared on The Fugs first album (originally titled The Village Fugs Sing Ballads of Contemporary Protest, Point of Views, and General Dissatisfaction).  Again the peak year of use is 2006 with 322 ‘shit’ songs that year.

Looking at these graphs, one would get the impression that use of profanity has grown substantially since the 70s and reached its peak a few years ago.   However, there’s more to the data than that.  Let’s look at a similar plot for a non-profane word:

This plot shows a very similar usage profile for the word ‘cat’,  with substantial growth in use from the 70s until 2006 when it starts to taper off.   (Yes, ‘cat’ was found in many songs before 1976, but I am not showing those in the plot). Why do ‘fuck’ and ‘cat’ have such similar profiles?  It is not because their usage frequency has increased, it is because the total number of songs released has been increasing year-over-year until 2006, after which the number of new releases per year has been dropping off.  We see more ‘fuck’s  and ‘cat’s in 2006 because there were more songs released in 2006 than any other year.  For a more accurate view we need to look at the relative usage changes.  This plot shows the usage of the word ‘fuck’ relative to the usage of other words in song titles.  Even when we look at the use of the word ‘fuck’ relative to other words there is a clear increasing trend. 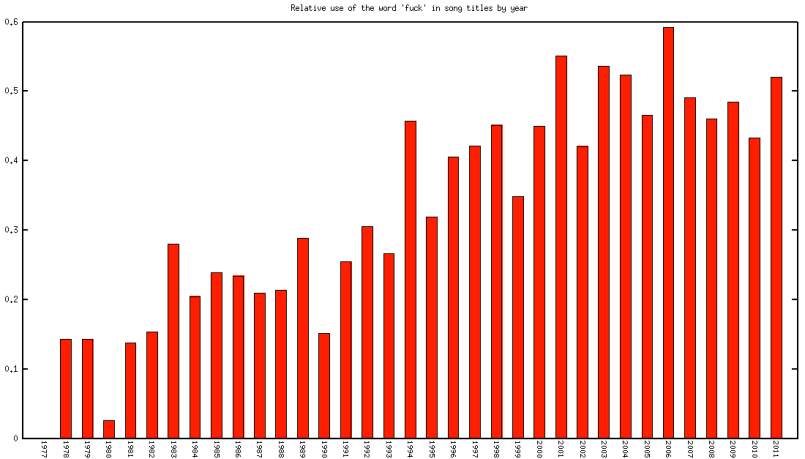 Is music getting more profane? The answer is yes. The data show that the likelihood of a song with the word ‘fuck’ in the title has more than doubled since the 80s.  And it doesn’t look like this trend has reached its peak yet.  I think we shall continue to see a rise in use of language that gets a rise out of moms like Tipper Gore.

This entry was posted on April 1, 2012, 10:18 am and is filed under data, fun, Music. You can follow any responses to this entry through RSS 2.0. Both comments and pings are currently closed.