I’ve just returned from my weekend in London where I participated in the Music Hack Day held at the Guardian Offices in London.  The event was attended by nearly 200 hackers who spent the weekend learning about new music technologies and then using those technologies to build something new. This was a fantastic event that seemingly went off without a hitch. The internet worked, there was plenty of coffee, sodas and beer, and it was a very comfortable space to get stuff done.   And people got things done – over 50 hacks were built –  Here are some of my favorites:

Speakatron – A program that looks at you through your web cam and plays a sound when you open your mouth. It can tell what shape you’re making and how high your mouth is on the screen as synthesis parameters. This one was the  big crowd pleaser.  Here’s a pic of Marek giving his demo:

Future of Music 2010 – Brian Whitman presents the best music recommendation technology ever – Future of Music (2010)” is a Mac OS X app that scans your iTunes library and computes the music you are not supposed to listen to anymore based on your preferences. It then helpfully deletes it from iTunes and your hard drive. Skips the recycle bin. Just like other recommender systems, it uses a lot of fancy math (and data from Echo Nest and last.fm) that really doesn’t matter in the end. Just click the button and let it take care of your life. Yes, indeed, this app erases the music from your hard drive that you shouldn’t be listening too.

Lazy DJ – LazyDJ is an app for lazy DJs who do not want to think about what song they should play next. 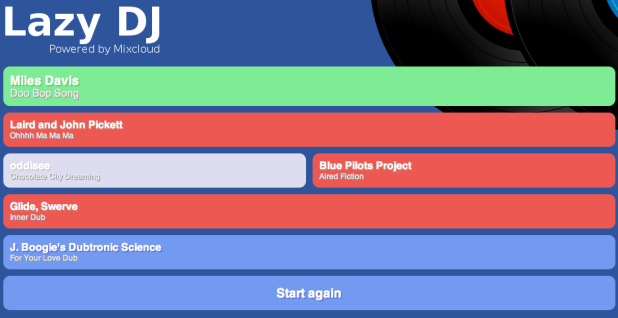 Radio 1 Playlist Squirrel – Using small woodland animals to help discover music.  You have to see it to understand it. Great demo. Hope they put it online, because, really the world needs more music discovering squirrels.

Radio Map – a real time browser for on-line radio – Sebastian Heise and Michael Hlatk analyzed the audio for hundreds of Internet radio stations and built a visualization of the Internet radio space that lets you browse for stations based on music similarity.

Auto Score Tubing – this is an amazing hack – using score synchronizing tech from Queen Mary’s music researchers, the folks from Musescore creates a hack that automatically synchronizes a music score with a youtube performance of that score.  Check out the video, it is awesome.

BumbleTab – a very patient guitar tutor – waits patiently for you to play the right notes, then stiches all of your right notes into an awesome song:

MashBox – a community driven mashable jukebox – which you can use to make mashups like Beat and Whip It.  There’s a nifty prezo on the process they used to create the mashup.

Earth Destroyers – this is my hack – it is a web app that tells you which bands have earth destroying tours. 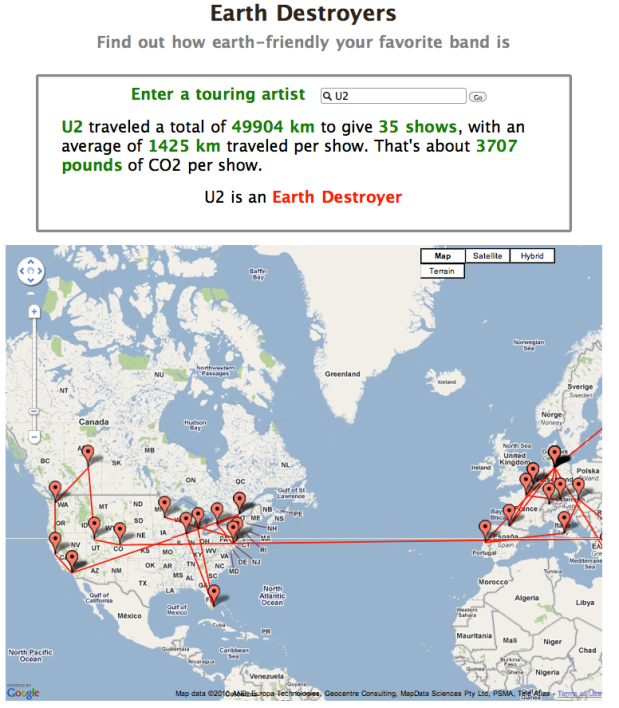 It is almost like being there:To get a taste of what it was like being at the Music Hack Day be sure to check out Thomas Bronte’s photos of the event  – in addition to being the CEO of musescore, Thomas is also an excellent photographer: Music Hack Day London 2010 Slide show

Congrats to Dave Haynes and all of the team that put together the Music Hack Day London.  It was a fantastic event!

This entry was posted on September 7, 2010, 9:13 am and is filed under code, events, fun, Music, The Echo Nest. You can follow any responses to this entry through RSS 2.0. Both comments and pings are currently closed.