The NameDropper has been live for less than a day and already I ‘ve collected some good data from the game play.   Here are some stats:

The artists that were most frequently confused with fake artists were:

93 Erik Satie
82 Ennio Morricone
66 Edvard Grieg
49 Nightwish
46 Yann Tiersen
40 Maurice Ravel
35 Porcupine Tree
34 Felix Mendelssohn
32 Dinah Washington
30 Antonio Vivaldi
This is showing that the game (and the underlying familiarity algorithm that drives it) may have a bias toward classical musicians.  One of the knobs we have in our familiarity algorithm is a boost for age of the artist (even though Beethoven doesn’t get played on the radio very often, most people have heard of him, so he gets a boost for being old).  But this early data suggests that we are giving a bit too much of an age boost.  Ideally, the most frequently confused artists would be spread evenly across genre. The fact that there are no Hip-Hop or Pop artists on this list suggests that our familiarity algorithm skews away from those artists.  Looks like we’ll have a few knobs to tweak.
Game-with-a-purpose are a great way to get data from humans that would otherwise be difficult to get.  The challenge in creating such a game though is to make one that is actually fun to play.  If your game is no fun, you won’t get any data at all.   Looking at player stats can give us an idea of how fun the game is.    Some NameDropper player stats:
Games per player:
Average:  4
Median: 2
Max: 182    (woah, someone played 182 times!)
Time spent playing:
Average: 236 secs
Median: 90 secs
Max:  10,995 secs (over 3 hours)
Scores:
Average: 9139
Median: 4054
Min: -4656
Max: 54671
Yep, someone scored -4656 points.  If you take too long to answer you get dinged (to avoid the Wikipedia winner).
I was a bit concerned as to whether or not someone could ‘learn’ the game (my daughter Cari suggested as much), so I looked at the scores over time of one of the frequent players to see if the score trended upwards. 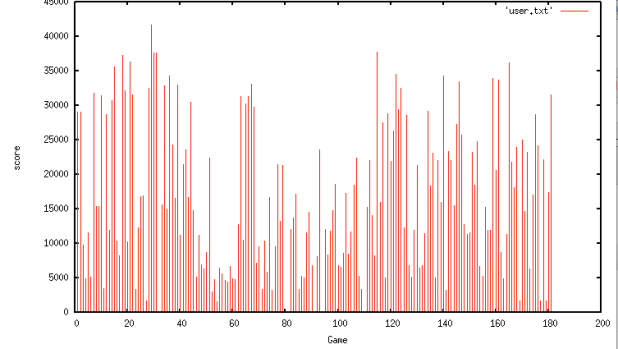 There doesn’t seem to be any noticeable trend for this user, so it seems that the game is perhaps a good measure of general music knowledge and not a measure of how may times you’ve played the game.  People are still playing the game – and there seems to be a good fight for the top spot on the leaderboard which means that I should continue to get good data.  Next step is to tweak the familiarity knobs based on the data collected so far and update the game to see if the average scores go up.

This entry was posted on July 11, 2010, 12:01 pm and is filed under code, fun, Music, The Echo Nest. You can follow any responses to this entry through RSS 2.0. Both comments and pings are currently closed.