Poolcasting: an intelligent technique to customise music programmes for their audience

In preparation for his defense, Claudio Baccigalupo has placed online his thesis: Poolcasting: an intelligent technique to customise music programmes for their audience.  It looks to be an in depth look at playlisting. 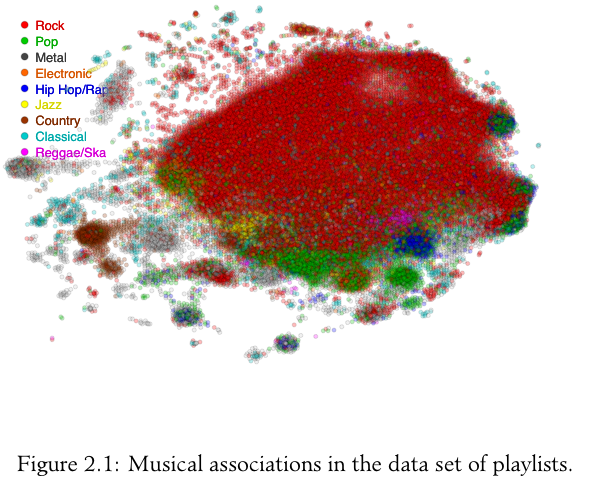 Poolcasting is an intelligent technique to customise musical sequences for groups of listeners. Poolcasting acts like a disc jockey, determining and delivering songs that satisfy its audience. Satisfying an entire audience is not an easy task, especially when members of the group have heterogeneous preferences and can join and leave the group at different times. The approach of poolcasting consists in selecting songs iteratively, in real time, favouring those members who are less satisfied by the previous songs played.

Poolcasting additionally ensures that the played sequence does not repeat the same songs or artists closely and that pairs of consecutive songs ‘flow’ well one after the other, in a musical sense. Good disc jockeys know from expertise which songs sound well in sequence; poolcasting obtains this knowledge from the analysis of playlists shared on the Web. The more two songs occur closely in playlists, the more poolcasting considers two songs as associated, in accordance with the human experiences expressed through playlists. Combining this knowledge and the music profiles of the listeners, poolcasting autonomously generates sequences that are varied, musically smooth and fairly adapted for a particular audience.

A natural application for poolcasting is automating radio programmes. Many online radios broadcast on each channel a random sequence of songs that is not affected by who is listening. Applying poolcasting can improve radio programmes, playing on each channel a varied, smooth and group-customised musical sequence. The integration of poolcasting into a Web radio has resulted in an innovative system called Poolcasting Web radio. Tens of people have connected to this online radio during one year providing first-hand evaluation of its social features. A set of experiments have been executed to evaluate how much the size of the group and its musical homogeneity affect the performance of the poolcasting technique.

This entry was posted on November 2, 2009, 8:29 am and is filed under Music, music information retrieval, research. You can follow any responses to this entry through RSS 2.0. Both comments and pings are currently closed.