There have been 30 Music Hack Days since the movement began back in 2009.  Since then there have been somewhere around 1,500 music hacks built.  I’ve seen lots of and lots of hacks, many have been technical marvels that have become the seeds of new music startups. However,  there’s no better hack to demonstrate what music hacking is all about than the hack by Iain Mullan called ‘Johnny Cash has been Everywhere‘.  This web app is simple – it plays Johnny Cash’s version of “I’ve been everywhere”, while it shows you on a Google  map all of the places Johnny has been.  Check the hack out here: 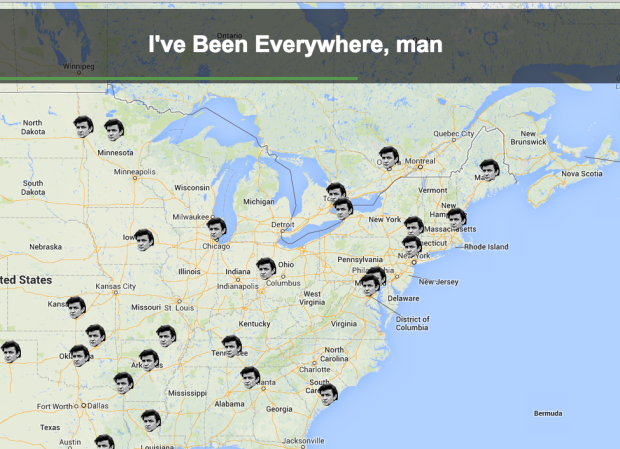 To me it’s the perfect hack because it captures all that is best about music hacking. First, it combines a few web services that had never been combined before (Tomahawk, MusixMatch and Google maps). Second, it has absolutely no commercial value: it’s an app built entirely for and around an obscure,  20 year old recording of a 50 year old song – there is no way to repackage this hack for other songs since just aren’t that many songs that list a hundred cities. Third,  its simple – inside and out. Most first year Javascript programmers would be able to re-create this app, and the only thing the user needs to do is hit the play button. But despite its simplicity Iain has done a great job making it polished enough to show to anyone. Fourth, its original. I’ve never seen any hack like this before, not an insignificant feat considering the 1,500 music hacks that have already been built.  And finally – it is whimsical and fun. It exists only for the 4 minutes of pure enjoyment you get from watching it play through that first time.

As we enter the thick of Music Hack Day season, I offer up this hack as an example of  a hack to aspire to. Whimsical, original, simple and fun. Don’t worry about the business plan, don’t worry about cramming in every feature or API, just build something neat.  And I look forward to seeing what Iain builds at his next Music Hack Day

This entry was posted on September 17, 2013, 2:59 pm and is filed under code, fun, hacking, music hack day. You can follow any responses to this entry through RSS 2.0. Both comments and pings are currently closed.