by Kazuyoshi Yoshii and Masataka Goto

Approach: Use PLSI to create a  3-way aspect model: user-song-feature – the unobservable category regading genre, tempo, vocal age, popularity etc.  – pLSI typical patterns are given by relationships between users, songs and a limited number of topics.  Some drawbacks: PLSI needs discrete features, multinomial distributions are assumed.  To deal with this formulate continuous pLSI, use gaussian mixture models and can assume continuous distributions.  A drawback of continuous pLSI – local minimum problem and the hub problem.  Popular songs are recommended often because of the hubs.  How to deal with this: Gaussian parameter tying – this reduces the number of free parameters. Only the mixture weights vary. Artist-based song clustering: Train an artist-based model and update it to a song-based model by an incremental training method (from 2007).

Evaluation: They found that using the  techniques to adjust model complexity significantly improved the accuracy of recommendations and that the second technique could also reduce hubness.

This paper presents an approach to generating steerable playlists. They first demonstrate a method for learning song transition probabilities from audio features extracted from songs played in professional radio station playlists and then show that by using this learnt similarity function as a prior, they are able to generate steerable playlists by choosing the next song to play not simply based on that prior, but on a tag cloud that the user is able to manipulate to express the high-level characteristics of the music he wishes to listen to.

Problem:  They had positive examples but didn’t have an explicit set of negative examples.   Chose them at random.

Learning the song space: Trained a binary classifier to determine if a song sequence is real.

Abstract: In this paper, we analyse and evaluate several heuristics for adding songs to a dynamically generated playlist. We explain how radio logs can be used for evaluating such heuristics, and show that formalizing the heuristics using fuzzy set theory simplifies the analysis. More concretely, we verify previous results by means of a large scale evaluation based on 1.26 million listening patterns extracted from radio logs, and explain why some heuristics perform better than others by analysing their formal definitions and conducting additional evaluations. 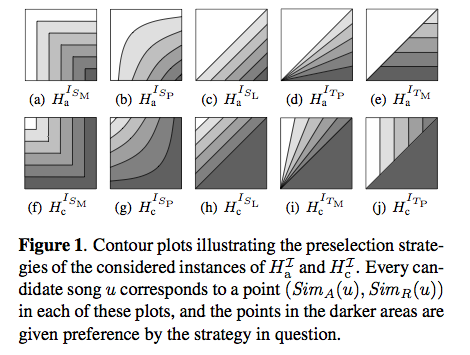 Great talk, lots of things to think about. 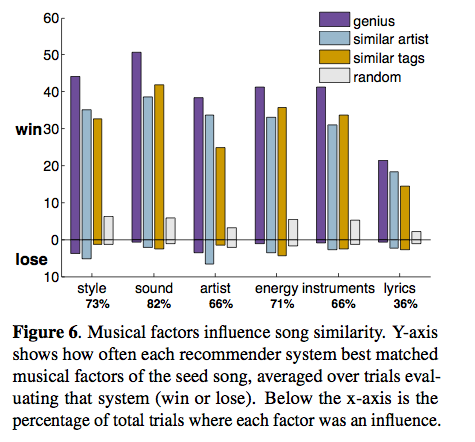 This entry was posted on October 27, 2009, 9:23 pm and is filed under events, ismir. You can follow any responses to this entry through RSS 2.0. Both comments and pings are currently closed.